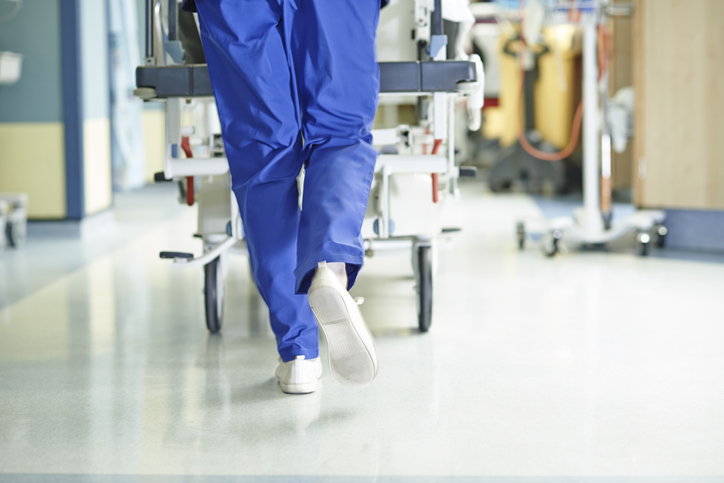 The Hospital ISM® Report On Business® was unveiled not long after the coronavirus pandemic began, so it’s fitting — and not surprising — that many of the index readings have ebbed, flowed, surged and subsided as COVID-19 has.

With the omicron variant on the wane in the U.S. and the seven-day rolling average of cases at its lowest level since July, the direction of the pandemic was again mirrored by the Hospital PMI® data, released on Monday. The composite index reading of 56.9 percent was a 7.2-percentage point decrease compared to January, and the Business Activity and New Orders indexes had double-digit drops, the latter falling into contraction territory.

However, there’s precedent for such data movement, Nancy LeMaster, MBA, Chair of the Institute for Supply Management® Hospital Business Survey Committee, told a conference call of reporters on Monday. There were similar dips in January 2021, as delta variant cases and hospitalizations declined, while vaccines distribution picked up. Then, as now, hospitals cannot immediately pivot from serving mostly COVID-19 patients to resuming normal levels of elective treatment, meaning lowered business activity and new orders.

A “pessimistic” near-term outlook for #healthcare facilities in February, according to the Hospital @ISM® Report On Business®. The Hospital PMI® fell to 56.9%, lowest since January 2021, as new orders and business activity growth stalled. https://t.co/GoewGn6i3E #ISMPMI #economy

“It was a dramatic month as you looked at the numbers,” LeMaster said. “I was thinking we hadn’t seen shifts like this before, but as I went back in the data, it turns out we had.”

Still, LeMaster was more upbeat in her summary that she was in January, when she said she felt like a “bearer of doom” and heard-pressed to find a silver lining. In February, though, there was a nice silver lining: The Employment Index increased 14 percentage points to return to above 50 percent, breaking a seven-month stay in contraction purgatory.

Business Survey Committee respondents reported success with employee incentives, and many workers felt more comfortable returning to a hospital environment. “One data point isn’t a trend, but if this is a leading indicator that hospitals can hire again, (that is) good news,” LeMaster said. “When COVID-19 has been strong and hospitals full, it has been a challenge especially hiring service workers and nonclinical workers like housekeepers and food service. Hopefully, (February) was a snapshot that signals a transition in staffing success.”

That said, many challenges of recent months were no less intense in February. The Backlog of Orders Index received much attention in ISM’s Manufacturing and Services reports last week, with a combined 15.4-percentage point increase in February. The Hospital version of the index — which measures patient service requests, including wait times for elective procedures and other appointments — rose just 1 percentage point, as it has been comfortably above 60 percent for months.

Backlogs for supplies, meanwhile, were a big issue among respondents. Wrote one, “Back orders are horrendous. Half of my orders are back-ordered. We get a few responses from our sales representatives — and when you do get a response, it’s that they can’t help you.” The Supplier Deliveries index decreased 5 percentage points in February but remained above 70 percent, indicating longer lead times, and many key commodities were in short supply.

“If there will be more elective procedures, that’s going to be dependent on supplies and staffing,” LeMaster said. “In many ways, the supply situation isn’t getting better. But it isn’t getting significantly worse, either — buyers are continuing to juggle and look for supplies from some nontraditional suppliers. It’s something many have become good at they’ve had to do that juggling for so long.”