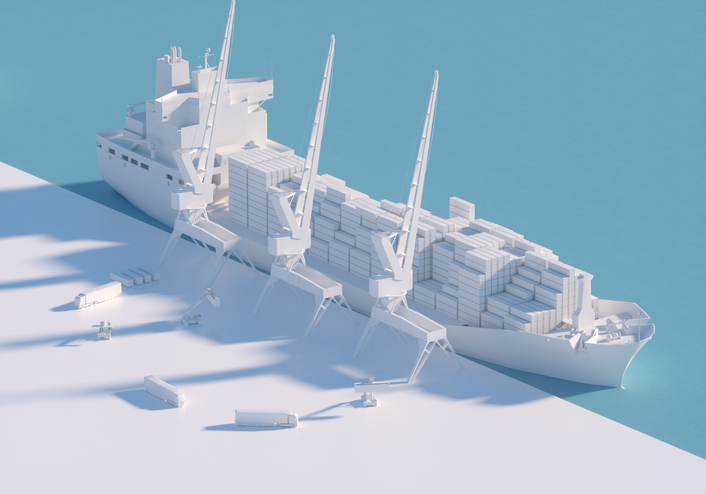 Cost has long been the biggest driver in procurement decisions, but sustainability is joining it as a critical factor in how suppliers are selected as companies strengthen their environmental, social and governance (ESG) commitments.

This change is becoming more prevalent in the shipping industry, which has dealt with such disruption of late as port congestion and delayed deliveries, says Jack Macfarlane, CEO and co-founder of cloud-based procurement platform DeepStream.

The industry is moving from an “old-school” way of operating and selecting suppliers to a more modern environment that features digital platforms, enabling what he calls “a more level or open playing field and market-based economy.” Such an environment offers more visibility and transparency into the supplier selection process, including the ability to apply sustainability metrics, he says.

“This focus on sustainability is especially needed in shipping,” Macfarlane says, noting that “90 percent of world trade moves by sea, and container ships can be heavy polluters.”

Many large organizations have set ambitious targets to reduce greenhouse gas emissions and reach net-zero carbon emissions, some as early as 2030.

“From a big-picture point of view, it feels like … a shift in how the corporate landscape is evolving,” he says. “It doesn’t feel like (companies are) putting out statements just to look good and forget about it in a year’s time. It does feel like a shift, and it’s a shift that been properly done.”

Stakeholders — including shareholders and investors, corporate governance professionals, company leadership, and customers and consumers — are driving such changes.

This has put pressure on ship owners to “go green,” Macfarlane says. Shipping magnate A.P. Moller-Maersk, for example, has announced plans to launch a carbon-neutral liner vessel — fueled by methanol — in 2023, seven years earlier than planned. Methanol and alcohol blends are among the alternative fuels being considered by companies as sustainable fuel options.

“Our ambition to have a carbon-neutral fleet by 2050 was a moonshot when we announced in 2018,” Soren Skou, A.P. Moller-Maersk’s CEO, said in a statement last year. “Today, we see it as a challenging, yet achievable target to reach.”

Reaching sustainability goals is generally a costly endeavor, and one characterized by challenges. In crafting goals, it can be difficult for companies to understand all the environmental ramifications their supply chains have, Macfarlane says. “Only with comprehensive data analytics will these organizations be able to say they’ve reached net-zero,” he says.

Additionally, it’s critical to ensure that sustainability goals are properly affected in business processes, he says. “How do shippers actually get to the endpoint they want?” he says. “That's a bit trickier, because it’s quite easy for CEOs of companies to (support) this and say they’re going to do something. But when companies have 1,000 employees or 50,000 employees, how do you get everyone to change their culture and the process in a way that achieves the top goals of the company?”

One strategy, Macfarlane says, is making the decision matrix/supplier selection process more transparent. Sustainability metrics need to be embedded in the selection process, he says. And sustainability needs to be given as much importance and attention as other selection factors like pricing, he says. “It could be that suppliers lose out on bids, even though they are the cheapest, because they don’t use green fuel or they don’t have sustainability-based metrics,” he says.

While there is a shift towards sustainability as a metric, it’s a work in progress. “It’s something that will take time, because it requires ingraining it in company’s operations,” Macfarlane says.

Among the dynamics that will help:

Such data could paint a complete picture as to what’s working and what’s not. For example, using “a greener fuel might be more inefficient and have a larger carbon footprint because you have to transport that greener fuel from one place to another,” he says.

“That reporting requirement may be more powerful than a blanket (governmental) regulation” that outlines sustainability criteria, Macfarlane says. “You get to a solution more quickly if the sustainability metrics matter to the company.”

More companies, Macfarlane says, are putting in place frameworks or templates around sustainability-related items that suppliers must bid on. That is slowly moving suppliers to invest in making sustainability a priority, he says: “In the same way they bid on price or health and safety, they’re bidding on sustainability-based questionnaires in that selection process. It’s moving those suppliers onto a greener footing.”