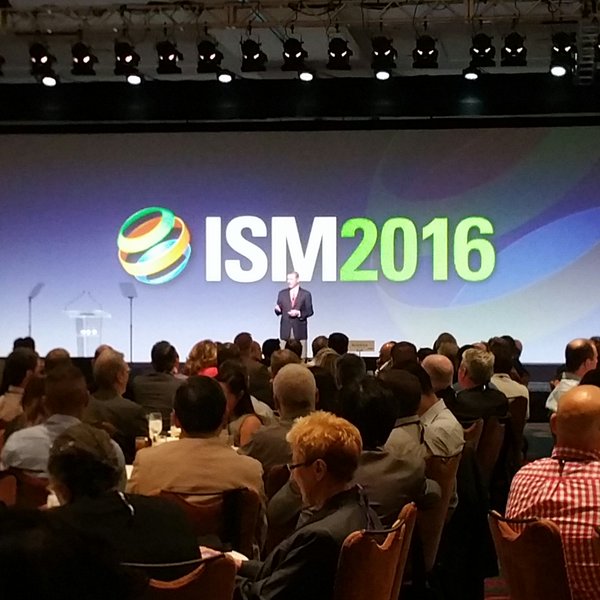 The ISM2016 Annual Conference in Indianapolis began in full swing on Monday, and while the Exhibit Hall and Conference sessions were the epicenter of bustle, Twitter tried its best to keep up. There was plenty of activity involving the #ISM2016 hashtag as Conference presenters, exhibitors and attendees shared their experiences.

We'll pass along the best of ISM2016 Twitter through Wednesday. Among Monday's highlights:

Expectations were high for keynote speaker Alan Mulally going into the Conference, and the former Ford Motor Company president and CEO pleased his audience with an informative and inspiring address.

Love that slide from @ford at #ISM2016, so much truth in those bullet points! https://t.co/GrgT0Nd0BG

What a great keynote! Who else suddenly wants to go out and buy a Ford? #ISM2016

Indianapolis is a good place to find hot rides, especially with the world's most famous auto race just two weeks away. The "Cruise and Connect" GM Car Show featured lots of horsepower.

The Exhibit Hall was busy. We noticed Sparty, Michigan State University's athletics mascot, in the background and would have loved to hear his supply management wisdom.

The Conference sessions featured no shortage of insights to take away.

“You can’t innovate in the margins.” - Chris Sawchuk @TheHackettGroup Smart #procurement orgs give top down resources to innovation #ISM2016

Mr. Ferrell says to create a plan even if you don't know what you want to do. It will provide clarity. #ISM2016

93% of the presentation is forgotten 7 min post session. Best thing I learned @ #ISM2016

And finally, at ISM2016, we like to think everyone's a winner.