43rd President of the United States and Founder of the George W. Bush Presidential Center 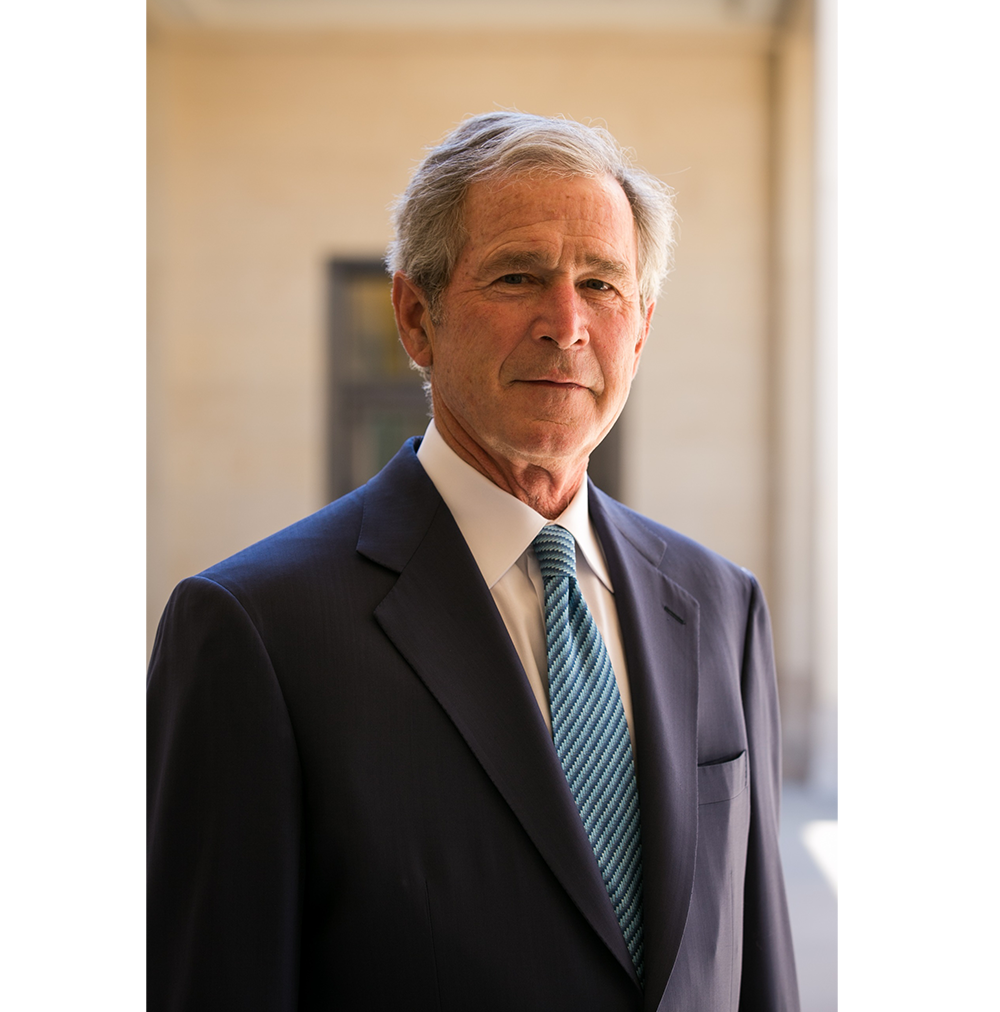 George W. Bush served as 43rd President of the United States of America from 2001 to 2009. As Commander in Chief, President Bush worked to expand freedom, opportunity, and security at home and abroad. He entered office with a robust domestic agenda. His first initiative as President was the No Child Left Behind Act, a bipartisan measure that raised standards in schools, insisted on accountability in return for federal dollars, and led to measurable gains in achievement – especially among minority students. Faced with a recession when he took office, President Bush cut taxes for every federal income taxpayer, which helped lead to an unprecedented 52 straight months of job creation. New free trade agreements enacted by the Bush Administration opened up American goods and services to new markets of more than 130 million consumers. Additionally, President Bush worked with Congress to modernize Medicare with a prescription drug benefit and introduced market forces to the healthcare system by establishing Health Savings Accounts. The Bush Administration also focused on a variety of environmental issues, including efforts to reduce emissions and create the world’s largest marine protected area.

Following the terrorist attacks on September 11, 2001, President Bush responded with a comprehensive strategy to protect the American people and wage a global war on terror. His administration built global coalitions to remove violent regimes in Afghanistan and Iraq that threatened America, liberating more than 50 million people from tyranny. Recognizing that liberty and hope are the best alternative to the extremist ideology of the terrorists, he provided unprecedented American support for young democracies and dissidents in the Middle East, Eastern Europe, Latin America, and elsewhere. President Bush also launched global HIV/AIDS and malaria initiatives that have saved millions of lives, particularly in sub-Saharan Africa.

President Bush grew up in Midland, Texas, as the eldest son of Barbara and George H.W. Bush – later the 41st President of the United States. He received a bachelor’s degree in history from Yale University and a master’s degree in business administration from Harvard Business School. President Bush also served as a pilot in the Texas Air National Guard. Following business school, he returned to Midland and met Laura Welch. They were married in 1977. After working in the energy business in West Texas for several years, President Bush moved to Dallas and joined a group of partners that purchased the Texas Rangers baseball franchise. In 1995, he was sworn in as the 46th Governor of Texas.

President Bush is the author of four bestselling books: Decision Points (2010), 41: A Portrait of My Father (2014), Portraits of Courage: A Commander in Chief’s Tribute to America’s Warriors (2017), and Out of Many, One: Portraits of America’s Immigrants (2021).

He and Laura are the parents of twin daughters: Barbara, married to Craig Coyne, and Jenna, married to Henry Hager. The Bushes also are the proud grandparents of Margaret Laura “Mila”, Poppy Louise, Henry Harold “Hal” Hager, and Cora Georgia Coyne. The Bush family also includes two cats, Bob and Bernadette, as well as Freddy the dog.