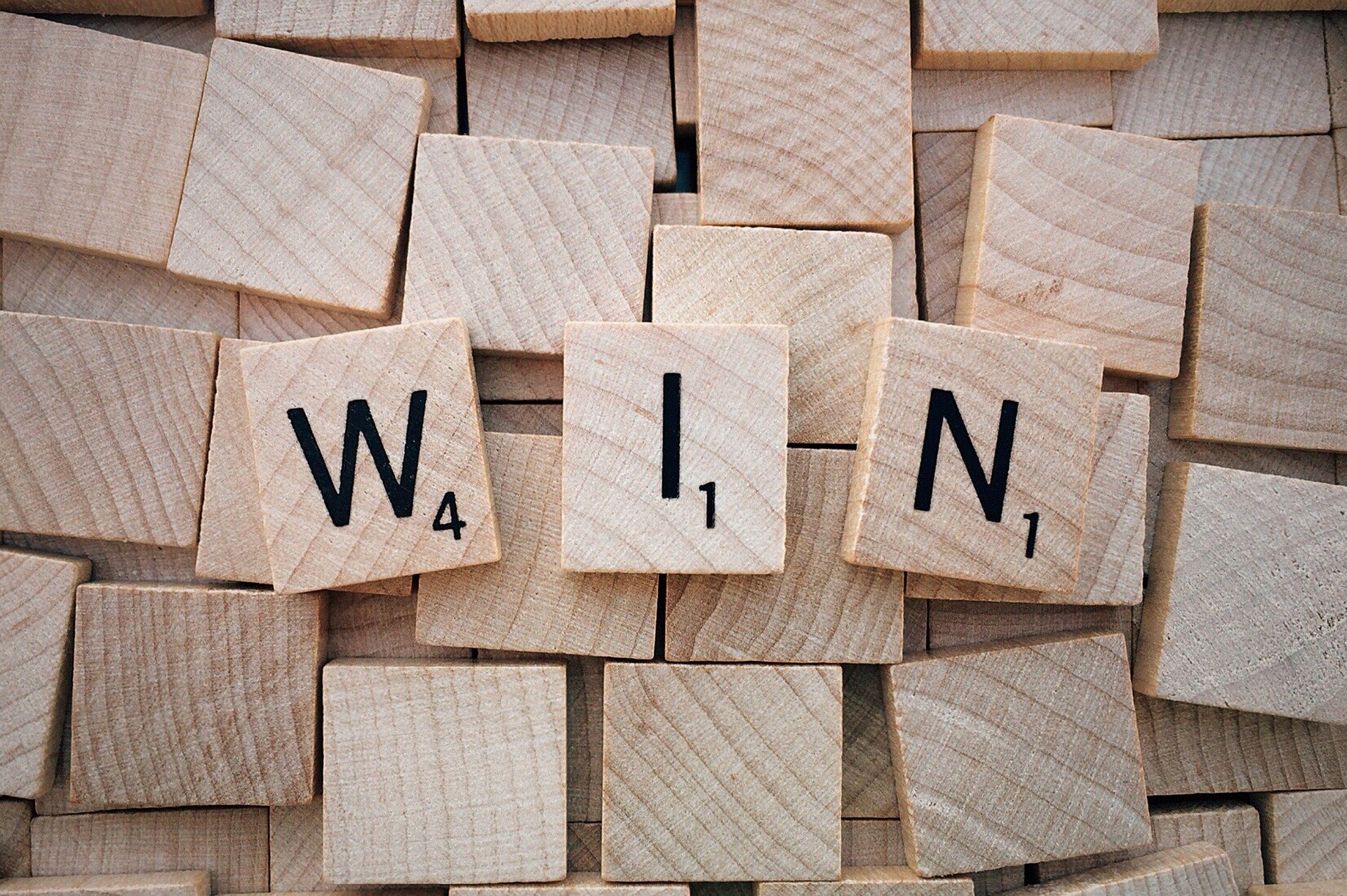 Some sourcing business deals are simple to negotiate, especially when they are basic transactional deals, such as for office supplies. Other more strategic sourcing contracts might go through difficult and lengthy RFP processes.

In either case, questions and uncertainties can enter the picture. Have you chosen the right sourcing partner/supplier? Is the relationship firing on all cylinders? Are there procedures in place to handle changes in personnel and unforeseen events as “business happens?” Is your supplier able to solve tough business problems? To innovate? To communicate well?

Harsh reality can set in when you pull out the original contract and realize that those important questions are not adequately addressed, or terms are not implemented well. If you are like many companies, efforts that began with great promise and optimism can turn into something quite different.

Simply put, constructing a successful contract does not have to be the legal equivalent of going to the dentist for a root canal.

Researchers at the University of Tennessee (UT) have uncovered a better, more user-friendly way of getting to a sound sourcing agreement. They (with original funding from the U.S. Air Force) studied some of the most successful outsourcing agreements from such companies as Procter & Gamble, Microsoft and McDonald’s. They also studied the most successful government deals such as the U.S. Department of Energy’s Rocky Flats Environmental Technology Site cleanup and the Minnesota’s Department of Transportation’s rebuild of the Interstate 35W Mississippi River bridge.

In all cases, these highly successful supplier relationships received awards. For example, Microsoft’s back office finance operations contract with Accenture has won a dozen awards, including from the Shared Services & Outsourcing Network and the International Association of Outsourcing Professionals — not to mention Microsoft’s 2017 Supplier of the Year Award for large companies.

So what makes the best so successful? That was the question that UT’s researchers set out to explore in their decade-long research.

The answers were surprising. The best companies were not doing the same things better — rather they were doing things differently. The most basic finding was that successful sourcing agreements moved from the traditional buy-sell arm’s-length mindset for contracts. Instead, they used a relational approach that emphasized how the company and supplier could build a relationship with a goal to achieve business outcomes in a dynamic environment.

Researchers coined the approach of these successful deals “Vested Outsourcing” or Vested for short, because buyers and sellers collaboratively crafted contracts steeped in mutual advantage, binding each party to a win-win approach and creating strong governance structures that enabled the parties to stay aligned long after the initial handshake or contract was signed. In essence, the parties in the contract were vested in each other’s success.

The UT findings support what the legal scholar Ian R. Macneil observed in his 1968 book Contracts, Instruments for Social Cooperation, East Africa. Macneil wrote, “Somewhere along the line of increasing duration and complexity, (the contract) escapes the traditional legal model.” He argued that contracts are rooted in the classical approach to contract law, and thus crafted to address transactions and legal protections such as pricing and price changes, service levels, limitation of liability, indemnification and liquidated damages. Macneil advocated that contracting should instead focus on being instruments for social cooperation.

Unfortunately, many companies still use highly conventional approaches to contract law, where the buyers and supplier are at arm’s length, using tactics and leverage and power to shift risk. While some organizations might say they are moving to more strategic partners, they are almost always still contracting with conventional approaches.

Research by the International Association for Contract and Commercial Management (IACCM) has found that contract terms remain mired in the classical legal and transaction-based approach of contract law, which focuses almost exclusively and hierarchically on pricing, limiting liability, indemnification, service and transaction levels, risk mitigation and liquidated damages. The good news? The ideas of innovative collaboration and sharing value are slowly catching on in progressive contracting and governance provisions.

UT and IACCM research is not the only academic research supporting the premise that a more flexible, friendly approach to getting to a contract is needed. Oliver E. Williamson, the 2009 Nobel prize co-winner in economic sciences, suggests businesses should adopt a highly adjustable or adaptable approach, rather than one that prescriptively outlines detailed transactions, rigid terms and conditions, SOW and working relations. Why? Williamson says, “all complex contracts are incomplete” and lack a flexible framework to deal with “maladaptations.” This easily causes tensions and can put a wedge between buyers and suppliers.

As I often say, “business happens,” and today’s buyers and suppliers should embrace the fact that contracts need flexible frameworks to support the dynamic needs of business in a fair manner, using mechanisms that help both parties stay in alignment after the initial contract is signed.

1) Focus on outcomes, not transactions

3) Have clearly defined and measurable outcomes

4) Implement a pricing model with incentives that optimize the business

5) Establish an insight, rather than oversight, governance structure.

The Vested rules translate and implement Williamson’s and Macneil’s progressive concepts, which include collaboration, shared value and alignment, into modern practice.

UT’s research has led to six books that focus on the Vested sourcing business model for highly collaborative relationships. One of those books, The Vested Outsourcing Manual: A Guide for Creating Successful Business and Outsourcing Agreements, is a step-by-step guide for developing a contract, grounded by 10 essential “elements” that implement the five rules. The 10 elements are needed to take progressive business relationships to the next level. When the elements are embedded into a supplier relationship, the buyer and supplier shift to a collaborative, relational contract, with the buying organization buying a strategic supplier relationship.

The 10 elements align with Vested’s five rules, as illustrated by the following chart: 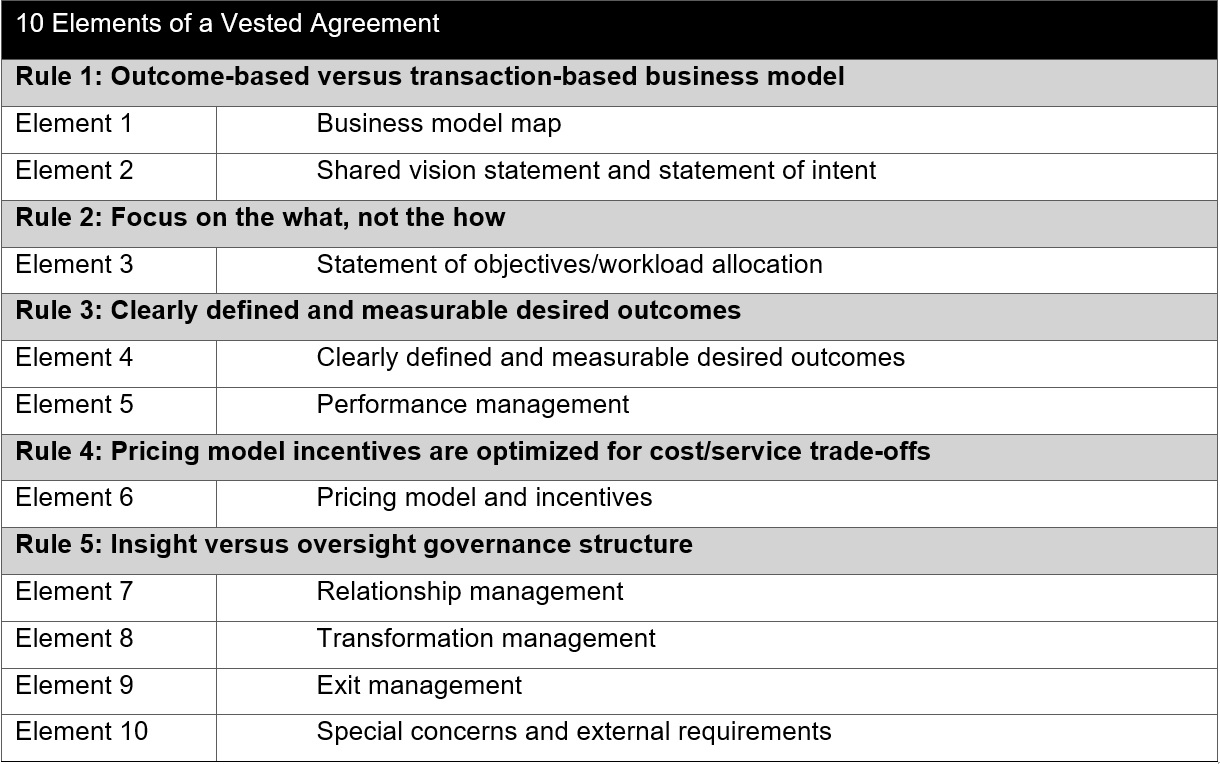 In future Inside Supply Management® Weekly issues, I’ll examine each of the 10 elements in a series of articles that will “unpack” what they are and how they work to create collaborative, value-laden supplier partnerships.

Kate Vitasek is an international authority on the Vested business model for highly collaborative relationships. She is the author of six books on the Vested model and a faculty member at the University of Tennessee in Knoxville, Tennessee.