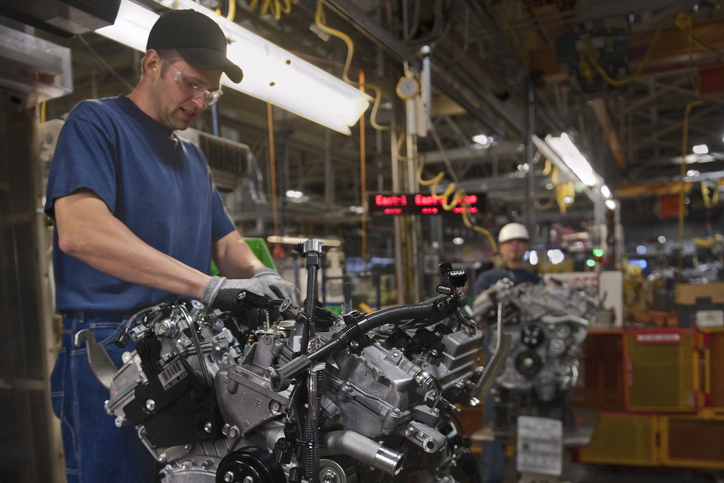 The Manufacturing ISM® Report On Business® for August featured the same composite PMI® (52.8 percent) as July, but reaction in many corners was markedly different — a lesson in how the subindex data can be just as revealing, if not more so, than the headline number.

Last month, some observers seized on subindex data consistent with previous recessions. On Thursday, the Manufacturing PMI® was a mirror image, but the calculations were not: The New Orders and Employment indexes returned to expansion; the Supplier Deliveries Index remained at a more ideal level, and the Prices Index (which does not directly factor into the PMI®) continued its plunge.

Noting that the PMI® was 53 percent in June, Fiore continued, “The manufacturing economy is very cyclical compared to the services side, but we’re not cycling. Three straight months of similar expansion says that things are very steady.”

On CNBC, analyst Rick Santelli said, “These are good numbers on new orders and employment, even though the headline number” remained at its lowest level since June 2020 (52.4 percent). However, market reaction was tepid — the Dow Jones Industrial Average declined more than 140 points following the Manufacturing PMI® data release as investors continued to speculate that such positive data would lead to further policy tightening by the U.S. Federal Reserve.

“I can’t rationalize what happens in the markets,” Fiore told Bloomberg TV on Thursday, but he added that there is a lot to like in the data for the manufacturing community, particularly through the lens of supply/demand balance.

A reason the composite index didn’t budge was a 3.1-percentage point decline in the Production Index, to 50.4 percent. However, the improvement in new orders and employment, as well as much slower prices growth that Fiore said should get previously hesitant buyers off the sidelines, bodes well for future production growth.

The Employment Index returned to expansion, somewhat with authority, increasing 4.3 percentage points to 54.2 percent. That was consistent with an encouraging weekly jobless claims report from the U.S. Department of Labor on Thursday; all eyes turn to the federal jobs data scheduled for release on Friday.

At 52.5 percent, the Prices Index is at its lowest level since June 2020 (51.3 percent) and has fallen 34.6 percentage points since March. “With prices backing off, buyers are more inclined to jump into the market, and employment is finally gaining, meaning production should come back up,” Fiore said. “Supplier deliveries are at a decent tension. … There are some adjustments going on related to supply/demand balance, but I think (the sector) has set a smooth path. I feel really good about where things are.”

".. , the [ISM] prices paid index plunged to 52.5, from 60.0, its lowest level in two years. That’s consistent with headline CPI inflation falling back below 2% before long – which we think it will do by the middle of next year."

If there are concerns, Fiore said, they are with (1) the New Export Orders Index, which fell into contraction (49.4 percent) due in part to sluggish demand in Europe and (2) continuing catching up in China as COVID-19 shutdowns — the most recent of 21.2 million residents in Chengdu — impact production.

Fiore said that about three months of stock on hand is necessary to buffer against such disruptions in China, and recent Inventories Index readings have reflected this dynamic. The August figure was 53.1 percent, a 4.2-percent decrease compared to July. (Since the Inventories Index directly factors into the PMI®, its decline was another reason the composite index reamined the same.)

However, many companies are still trying to stockpile: “Demand from customers is still strong, but much of that is because there is still fear of not getting product due to constraints,” wrote a Business Survey Committee respondent in Computer & Electronic Products. “They are stocking up. There will be a reckoning in the market when the music stops, and everyone's inventories are bloated.”

Bloomberg: U.S. Manufacturing Growth Holds Steady, Inflation Pressures Ease. “The figures suggest sustained yet moderate growth in manufacturing and some additional easing in supply constraints. The (U.S. sector) is so far faring better than its counterparts in Europe and Asia, where the war in Ukraine and economic slowdown in China are leading to shrinking factory activity. A weaker global economy and recession concerns have led to pullbacks in prices for oil, metals and other commodities.”

DailyFX: S&P 500 Retains Negative Bias Despite Better-than-Expected ISM Manufacturing Data. “The S&P 500 maintained a negative bias following the ISM results, as the better-than-expected data boosted U.S. Treasury yields and bolstered the argument that the economy remains healthy enough to tolerate a restrictive policy stance for longer. With growth not yet collapsing, the Fed will have no reason to adopt a dovish stance in the near term.”

Financial Times: U.S. Manufacturing Activity Remains Steady in August as Demand Rebounds. “After contracting the last two months, new orders grew in August to a reading of 51.3 (percent), signaling that demand is still strong amid an inflationary environment. There were also reports that prices for raw materials increased at a slower rate in August. … Still, the macroeconomic backdrop could still impinge factory activity for the rest of the year.”

These data reflect some resilience in the manufacturing sector, even as sentiment continued to be at two-year lows, consistent with other surveys. Manufacturers remained challenged by supply chains, workforce shortages, soaring costs and economic and geopolitical uncertainties.

Mace News: ISM Manufacturing Growth Steady on New Orders, Employment While Prices Ease. “Companies continued to hire at strong rates in August, with few indications of layoffs, hiring freezes or head-count reductions through attrition, Fiore said, adding that lower rates of quits were reported, a positive trend. However, Fiore told reporters that the contraction in new export orders was ‘disappointing.’ ”

MarketWatch: U.S. Factories Expand Again, ISM Finds, in Sign Economy Is Still Growing Steadily. Broad swaths of the economy have slowed in response to rising interest rates and the highest inflation in nearly 41 years. Yet manufacturers are still expanding and few companies are cutting jobs amid one of the worst labor shortages in decades. What’s in store in the months ahead, however, is increasingly uncertain.

Reuters: U.S. Manufacturing Sector Steady in August; Price Pressures Ease Further. “The continued growth in manufacturing is more evidence that the economy was not in recession despite gross domestic product contracting in the first half of the year. Sharp swings in inventories and the trade deficit tied to snarled global supply chains have been largely blamed for the decline in output, which has not been corroborated by the labor market. Supply chains are gradually improving.”

The Wall Street Journal: Good News Is Bad News Again. “Stocks extended their drop after Institute for Supply Management reported some good news. Business activity continued to expand in August, while the prices that companies reported paying dropped more than expected. Why is the market trading lower? ‘Good news is being traded as bad insofar as it provides (the Federal Reserve) further cover to continue aggressively tightening policy,’ writes Ian Lyngen, head of U.S. rates strategy at BMO Capital Markets.”

ISM’s Services PMI® will be unveiled on Tuesday, and the Hospital PMI® on September 8. For the most up-to-date content on the reports under the ISM® Report On Business® umbrella, use #ISMPMI on Twitter.