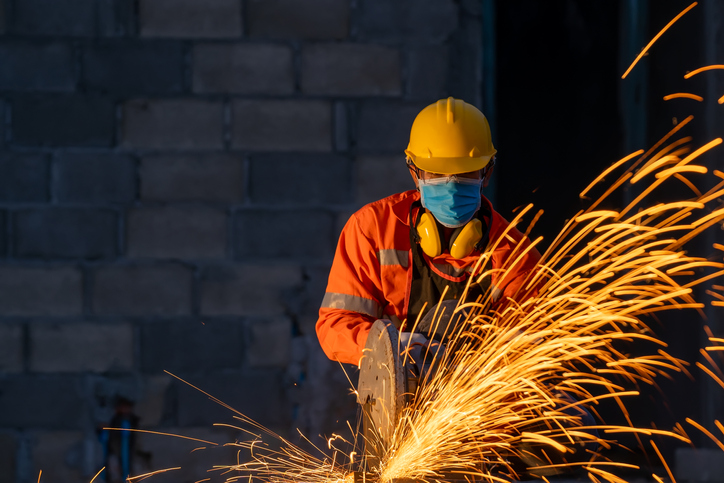 And while the December Manufacturing PMI®, released on Tuesday, did not meet economists’ expectations, the composite index reading of 58.7 percent reflected continuing growth for U.S. factories and a strong finish to a chaotic-at-times 2021. However, the PMI® was at its lowest level in 11 months and ended a streak of five straight readings above 60 percent.

Perhaps most critical for future months, the road to equilibrium has hit a pothole in the coronavirus omicron variant, whose spread and severity was not completely evident by the time the December numbers were compiled but has impacted the manufacturing sector since.

During the COVID-19 era, Fiore has said that the ISM® Report On Business® could be released on a weekly basis to reflect fast-changing developments. He reiterated that point during a Bloomberg TV interview and on a conference call with reporters on Tuesday, calling omicron “a speed bump, hopefully,” but adding that the highly contagious variant (and potential future COVID-19 strains) will, he said, “create labor issues that will be with us for a long time.”

With omicron the dominant strain in the U.S., more than 1 million new cases, a global single-day record, were reported on Monday. In the last week, Fiore said, he’s received reports of worker absenteeism at factories and suppliers as employees test positive. Those absences will strain supply chain resources in January and February, as demand is likely to remain high — creating conditions similar to when the delta variant spread last summer.

“So, here we are again,” Fiore told Bloomberg TV.

Without the COVID-19 factor, December would have been a positive “transition month,” Fiore said, with the New Orders and Production indexes around 60 percent, the Employment Index increasing slightly and the Supplier Deliveries Index dropping 7.3 percentage points to 64.9 percent, indicating improved transportation flows. But omicron should not have caught the manufacturing sector off-guard, as Fiore has long said the pandemic will be a fact of life for factories, perhaps indefinitely.

“I think the Employment Index numbers could sag a little, and supplier deliveries will struggle in January,” he said. “We may see an (increase) on inventories because there will be more work in process finished goods. … We had been projecting a positive path for two or three months, but omicron is something we’ll have to fight through for the next couple of months — and hopefully, there won't be anything else replacing it.” (The ISM Glossary of Key Supply Management Terms defines work in process inventory as “semi-finished goods, located at some point in the production process” that require additional assembly. This inventory remains at a factory, and on the books, until completed.)

Perhaps the most eye-catching ISM® Report On Business® data point on Tuesday was the Prices Index, which at 68.2 percent in December was lofty under any standard. However, that was a 14.2-percentage point decrease month over month, leading to chatter that inflation had reached a peak, or at least a turning point.

The game's not over, but Team Transitory with a big win in this set:
*DEC. ISM FACTORY PRICES-PAID INDEX FALLS TO 68.2 FROM 82.4 #Fed #FederalReserve #inflation

However, Fiore said that while prices growth might slow in 2022, it should continue. He cited ISM’s Semiannual Economic Forecast, released in December, which reported that manufacturing executives project prices to increase 8.1 percent in 2022, while services respondents expect a 9.2 percent hike. Last year, prices increased 14.5 percent this year in the manufacturing sector and 10.4 percent in services.

“I don’t think prices are at a peak yet, and I’m not speaking for me, I’m speaking for our (Business Survey Committee) respondents,” Fiore said. “I would say it’s a short-term dynamic, and we’ll probably see prices go back up then in (the first quarter). A few respondents report fewer increases than in the prior couple of months, which is indicative of the plastics, steel and energy markets. But as long as there are variables with labor, that will drive transportation and supplier deliveries — as well as prices.”

Among the commodities reported down in price in December were some of the biggest inflation bellwethers: metals aluminum and steel, crude oil and natural gas, and plastic polymer polyethylene. Aluminum, steel and natural gas were also reported up in price, suggesting some level of volatility in those markets.

(For more on commodities inflation and the overall economic outlook at the start of a new year, see the January/February issue of Inside Supply Management®; the digital edition will be available next week.)

US mfg activity slowed in Dec: ISM Mfg Index fell to 58.7, softest growth reading since Jan. Output is still healthy, but the retreat raises questions about what's in store for this year's Q1 as inflation remains elevated and the Omicron variant spreads: https://t.co/gHM663s8p4 pic.twitter.com/LpqXm0Cfz8

Associated Press: U.S. Manufacturing Activity Slows to 11-Month Low in December. “The slowdown in December reflected a decline in both new orders and in production. While the December performance still reflected strength in manufacturing, there were concerns that the current global surge in COVID-19 cases, largely the highly infectious omicron variant, could further depress manufacturing in coming months.”

Barron’s: Stocks Continue to Hit New Highs, Tech Tumbles — and What Else Is Happening in the Stock Market Today. “While markets want to see strength in the manufacturing sector, the good news is that the weaker-than-expected (Manufacturing PMI®) result does nothing to prompt the Federal Reserve to act faster in hiking interest rates to combat inflation from a hot economy. ‘Investors will be looking for more good data, but not so good that rate hike expectations are brought forward,’ wrote Tom Essaye, founder of Sevens Report Research.”

MarketWatch: U.S. Manufacturers Grow at Slowest Pace in 11 Months — and They’re Now Bracing for Omicron. “Manufacturers have plenty of demand for new cars, electronics, furniture and the so forth. What’s been their biggest problem has been obtaining enough supplies, workers and transportation for their goods. Omicron doesn’t help matters. The very contagious strain is likely to make it harder for manufacturers to keep production lines going at full tilt over the next few months due to employees missing work.”

Reuters: U.S. Manufacturing Activity Moderates in December; Supply Constraints Ebbing. “Raw materials have been in short supply as global economies rebounded from the COVID-19 pandemic. Shortages have also been exacerbated by the shift in demand to goods from service early in the pandemic. Millions of workers needed to produce and move raw materials remain sidelined. The tentative signs of improvement in supply chains suggest inflation at the factory gate could soon begin to subside.”

The most interesting development in the ISM manufacturing survey for December was the sharp decline in the price paid index, now historically consistent with inflation of nearer 3% pic.twitter.com/9jXO6H0fEp

The Wall Street Journal: Factories Took a Small Step Back Toward Normal. “A big part of why the manufacturing index slipped was that one of its component indexes, measuring supplier delivery times, slipped to 64.9 (percent) in December from 72.2 in November. Speedier delivery times are usually an indication that things are slowing down, but with all the bottlenecks manufacturers have been facing, this probably comes as more of a relief than anything else.”

Yahoo! Finance: ISM Manufacturing Activity Falls Short of Estimates; JOLTs Job Openings Fell in November. “(E)conomists looked for (the Manufacturing PMI®) to come in at 60.0 for December. Now, this compares to a reading of 61.1 for November, so we did see a little bit of a pullback in terms of manufacturing sector expansion,” reporter Emily McCormick said. “But … readings over that neutral level of 50.0 indicate expansion in a sector — so still expanding, but at a slightly decelerating pace for the final month of the year.”

ISM’s Services PMI® will be unveiled on Thursday, and the Hospital PMI® on Friday. For the most up-to-date content on the reports under the ISM® Report On Business® umbrella, use #ISMPMI on Twitter.