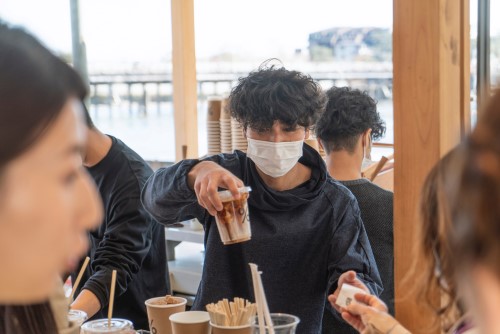 As a real-time indicator of U.S. economic activity, the ISM® Report On Business® is more of a focus on the month just completed than a forecast. However, many of the Business Survey Committee respondents’ comments are forward looking, with thoughts or concerns about future business conditions.

With the U.S. services sector heading into the annual holidays surge while still contending with a once-in-a-century pandemic, the urge to look ahead as been intensified lately. While the Services PMI™ for November registered a healthy 55.9 percent that indicated a sixth straight month of growth for non-manufacturing businesses, the sector is bracing for a one- or two-month period that could be unprecedented.

Dynamics that have been evident since the start of the pandemic — and tell a tale of two sides of the services sector — could get super-sized in December. Businesses that have adapted to virtual work, including technology firms and retail outlets, will likely continue to press on. Those reliant on in-person customers, like hotels and restaurants, will remain limited and miss out on much of the typical peak holiday season business.

“Certain industries within the sector are more impacted than others,” Anthony Nieves, CPSM, C.P.M., A.P.P., CFPM, Chair of the Institute for Supply Management® Services Business Survey Committee, said in a conference call with reporters on Thursday. “We know what’s happening with restaurants, with indoor and outdoor dining. The uncertainty with how these businesses reopen has really put a crimp into how they approach things, versus other industries that have had several months of adaptation with an online presence and other work-arounds.”

In November, Survey Committee respondents, particularly regarding employment and inventories, wrote of the challenge of simultaneously dealing with the holidays and the coronavirus (COVID-19) pandemic that claimed its highest single-day death toll in the U.S. on Wednesday. Wrote one respondent in Management of Companies & Support Services, “Business activity is inconsistent. Businesses that reopened are closing for a second time, leading to interruptions in the supply chain.”

Still, the services sector has remained resilient, and the November data reflects, Nieves said, “a continuing path of recovery, even with the second wave of the virus. Hopefully, progress on a vaccine will brighten the picture.” The Business Activity Index (58.0 percent) and forward-looking New Orders Index (57.2 percent) indicate a good amount in the pipeline.

In a week of closely watched #jobs data, @ISM Services #Employment Index was in expansion (51.5%) for a third straight month, but survey respondents expressed concerns over lack of qualified candidates and employees in #COVID19 quarantine. https://t.co/ZxrsVvPuQk #ISMPMI #economy

The Employment Index increased 1.4 percentage points to 51.5 percent, which Nieves said correlated with a slight reduction in initial unemployment claims this week, as well as the private-payrolls report from ADP and Moody’s Analytics that showed that services fared better than the manufacturing sector in November job creation. (ISM’s Manufacturing Employment Index fell into contraction territory in November.)

“The employment picture still not where it was pre-pandemic, but it’s definitely a bit of an uplift from where we were several months back,” Nieves said.

The Inventories (49.3 percent) and Inventory Sentiment (49.9 percent) indexes were in contraction territory in November, the latter for just the second time in the history of the Services PMI™, which debuted in 1997. That helped result in a 2.5-percentage point increase in the Imports Index, as companies sought inventory from outside the U.S. Also, low inventory levels usually suggest future services demand.

“The biggest challenges remain in the Accommodation & Food Services industry, more so for restaurant operators,” Nieves said. “Hotels are still suffering, though occupancy rates have seen an uptick. Their employment has not gone down, as we’ve seen for restaurants. It will be a challenge: The holiday season is typically strong for food services and retail, but there’s only so much business they can do (in the current environment).”

The ISM Services Index during November declined to 55.9 vs. 56.6 Oct & 55.8 consensus. Only slightly above the anticipated print, the gauge is nevertheless well north of 50 and consistent with an ongoing rebound in the service sector.

Associated Press: U.S. Service Sector Expansion Slows in November. “Out of the 18 service sector categories, 14 reported growth in November. The services sector had been growing for 122 consecutive months — more than a decade — before contracting in April and May as the coronavirus outbreak forced many businesses to close and people to stay home.”

Bloomberg: Service Industries in U.S. Expand at a More Moderate Pace. Consecutive monthly declines in the gauge underscore the pandemic-related challenges faced by service industries that include leisure and hospitality, travel, dining and retail. While still robust, odds of an acceleration of growth at service providers are diminished by a resurgence of Covid-19 and the onset of cooler temperatures.

CNBC: November’s Final Read of ISM Manufacturing Beats Forecasts. “Our final read on November ISM Services, expected at (55.8), overdelivered — by one-tenth (of a percentage point),” analyst Rick Santelli said. “At 55.9, which follows an unrevised 56.6. It’s the sixth month in a row in expansion territory. … We’re going to keep monitoring this and other PMIs as we try to move to the other side of the COVID-19 virus.”

MarketWatch: The Service Side of the U.S. Economy Absorbs Coronavirus Shock in November, But Worries Grow. “Some service-oriented companies such as tech firms have been big winners during the pandemic, but many have struggled to get back to normal. The latest viral outbreak will only make it harder on businesses that rely on large groups of customers, such as airlines, hotels, restaurants and entertainment venues.”

Reuters: U.S. Service Sector Cools in October — ISM Survey. The services industry is being constrained by a shift in spending towards goods as the raging coronavirus pandemic keeps Americans at home, boosting the manufacturing sector. … Spiraling COVID-19 infections could force authorities to re-impose restrictions to slow the spread of the respiratory illness as winter approaches, undercutting spending.

In case you missed Tuesday’s Report On Business® Roundup on the release of the November Manufacturing PMI®, you can read it here. ISM’s Hospital PMI™ will be released on Monday. For the most up-to-date content on the three indexes under the ISM® Report On Business® umbrella, use #ISMPMI on Twitter.