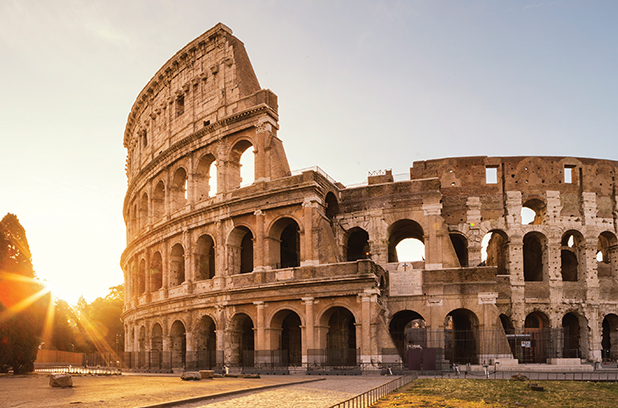 As I flew into Fiumicino International Airport in Rome several months ago, I was struck by how this most modern of ancient cities — which was, like the rest of the world, struggling with the coronavirus (COVID-19) pandemic — had overcome much worse over its long history. Rome, which has seen the best and worst in the human experience, is also a great example of perseverance and creativity in the face of adversity.

As one of the oldest global trading hubs, Rome can also teach us insightful lessons about how its supply chain, even in ancient times, was a great strength — as well as a weakness.

In our time, supply chains are no less essential — and they still pose risks that offer challenges and opportunities. As unprecedented as our times feel, history always has a lesson or two that can provide guidance, insight and even inspiration.

Less than 30 years into the rein of the emperor Augustus, in A.D. 1, Rome was unusual: The city had a population of more than 1 million. In the ancient world, providing food, water and sanitation for a city of such size was a massive achievement. No contemporary city would match the size of Rome for another 18 centuries; it was not until the early 1800s that Beijing and London topped 1 million in population.

Of all of Rome’s accomplishments, the supply chain it created to feed its population is probably its most impressive. Of course, this required a logistics network and sources of supply.

Logistics. Rome has been a major logistics center for more than 2,500 years. Just 15 miles southwest of the city, where the Tiber River flows into the Tyrrhenian Sea, lie the remains of the port complex of Ostia and Portus. Built and expanded over hundreds of years, the massive complex included ports, harbors, warehouses, roads and canals, all focused on the objective of funneling products from across the Roman Empire to the city.

Rome’s ancient hidden past can be seen on Google Earth — look directly below the airport for the hexagonal lake, Lago di Traiano (Harbor of Trajan). Much has changed since the harbor was constructed between A.D. 106 and 133: Built on the coast, it now sits more than a mile inland.

Sourcing and supply. “Whatever one does not see here, it is not a thing which has existed or exists,” philosopher Aelius Aristides said of Rome in the late second century. This was not an idle boast — Romans could enjoy any product the world could offer, including Chinese silk, Indian spices and Baltic amber.

Rome’s supply chain did not just serve the elite; it was an essential lifeline to which the city owed its survival and prosperity. The Latin phrase, “panem et circenses” (bread and circuses) from the Roman poet Juvenal is a euphemism for entertainment meant to distract the public. The emphasis during Roman times was on bread.

In a time when up to 75 percent of the calorie intake of the average Roman came from bread and porridge, the supply of grain was of paramount importance. By the time of Augustus, the Italian mainland provided only 10 percent of the grain needed to feed the city. The rest had to be obtained from Roman provinces, transported in round-hulled wooden sailing ships of about 75 tons.

Rome’s grain imports, estimated at as much as 800 million pounds a year, came primarily from North Africa and Egypt. This required a massive supply chain, which also supplied oil, wine, produce, fish, meat, garum, timber and linen, among other goods. While this supply chain helped the city grow and prosper, it also supplied unintended and less-desirable cargo — including a pandemic.

Risk management. The Antonine Plague of A.D. 165 to 180, named after the family of emperors who ruled during the period, arrived in Rome through its port to a population with no immunity. It rapidly devastated the city. At its peak, the plague — now believed to have been smallpox — killed thousands a day in Rome. The city’s trade links transmitted the contagion across the empire; similar outbreaks in Han China were likely linked.

Both Rome and the Han empire traded through Central Asia, the suspected origin of the pandemic. When subsequent waves of infection and plague followed from A.D. 249 to 262, Rome was weakened, leading to the commercial, political and military instability that would eventually unravel the empire.

Supply chains that help our world channel prosperity and growth can also harbor threats if not managed and controlled properly. A supply chain that was one of Rome’s biggest assets had limited visibility and resiliency — which could turn it into a deadly vulnerability.

More than 2,000 years later, supply chains are no less essential. Fortunately, today’s science, technology and resources provide many more tools to plan for and protect against disruptions stemming from extreme weather, an economic crisis, geopolitical turmoil or a virus outbreak.

Supply chain professionals have an essential role in securing and enhancing the resiliency of these essential systems — for their organizations as well as their communities. As during Roman times, modern supply chains are essential to health and prosperity, so supply managers must use all the tools at their disposal to secure and protect them.