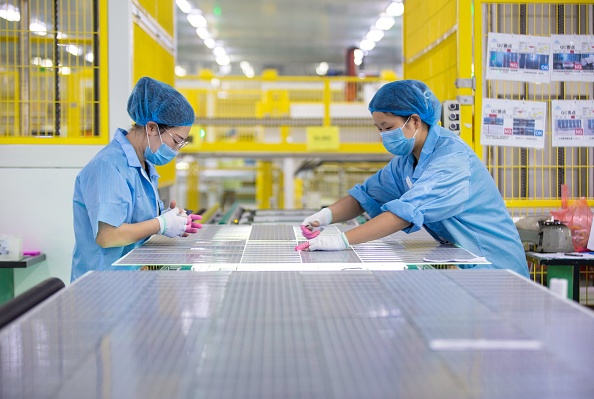 Employees work on the production line of solar panels at a workshop of Jiangsu Fox Group Co. in the Jiangsu Province of China. (Photo credit: Zhai Huiyong/VCG via Getty Images)

Companies are redesigning their supply chain networks amid continuing disruption. In the past two years, about three-quarters (74 percent) of supply chain leaders have changed the size and number of locations in their networks, a Gartner survey found.

Of the 403 supply chain leaders surveyed by the Stamford, Connecticut-based business consultancy, around half (51 percent) of respondents said they had increased the number of locations, while 23 percent had reduced them. About a quarter (24 percent) noted they had not changed the number of locations but had taken such other actions as increasing inventory and buffering capacity in their networks, while 2 percent noted no “meaningful changes” to their supply chain networks.

“There’s clearly a supply chain redesign underway, but not everyone is moving in the same direction or even to the same extent,” Kamala Raman, vice president with the Gartner Supply Chain practice, said in a press release. “Supply chain leaders have been modifying networks in a number of ways, be it with expansions, consolidations or simply modifications to buffers — which are more reversible than footprint decisions.”

These were only some of the operating models used, Raman said. “While the range of scales and approaches is wide, supply chains are undoubtedly on the move,” she said. For example, more than half of participating organizations “report making changes to manufacturing and supplier networks supporting at least 20 percent of revenue,” she said.

Among other survey findings: