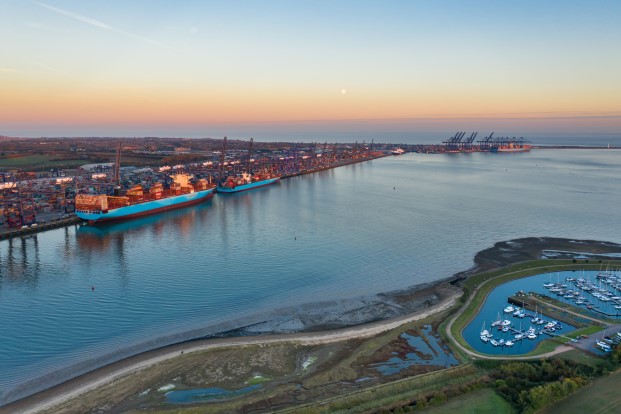 The United Kingdom’s (U.K.) busiest commercial port is following the pattern of many U.S. ports: congestion and driver shortages. According to news reports, Felixstowe Port, which is near Ipswich in Suffolk, England, has been turning away or diverting ships, although port officials say the problems are improving.

The logjam has been attributed to pre-holiday/peak season buying, the coronavirus pandemic and scheduling difficulties as well as the ongoing logistics issues.

“This port congestion at Felixstowe is the logical result of the ongoing HGV (heavy-goods vehicle) driver shortage in the U.K. combined with existing supply chain disruptions,” Alex Hersham, CEO and co-founder of London-based digital freight forwarding company Zencargo, said in a press release. “The lack of drivers means that simply not enough containers are being collected from the port, (while) there are still plenty of units trying to be brought in.”

Some containers have been sitting at the port for twice the typical time, which has pushed the port toward capacity, Hersham said. “With Felixstowe handling almost 40 percent of all the containers coming to and from the U.K.,” he said, “this adds yet more imbalance to Britain’s supply chain, especially in the current peak consumer period we are entering ahead of Christmas.”

The Felixstowe port has added 15,000 20-foot equivalent units (TEUs) worth of space at the terminal. But Hersham said, “This still isn’t enough to mitigate the congestion, and the port is now refusing empty containers from several major carriers onto the premises.”

Hersham said shipping lines may try to avoid dropping containers in the U.K., instead opting for smaller ports in Europe where feeder ships can then ferry goods across the channel. “This is the tactic that Maersk, the world’s largest container shipping company, has announced it’s taking to avoid the Felixstowe congestion,” he said, “and businesses will likely need to prepare for more changes like this in the coming weeks.”

Nevertheless, the British government recommends that consumers shop as they normally would for Christmas. Reuters news agency reported that officials believe there will be plenty of gifts.

The situation has offered some lessons learned, Hersham said. “One thing is for sure: Whatever happens, haulage needs to be booked further in advance by businesses,” he said. “At the moment, many drivers are only able to complete one out of their usual two drops per day as a result of increased driving distances to return empty containers to the ports that will still accept them.” This further constrains the capacity of the U.K.’s limited pool of hauliers, he said, and may result in cancelations as drivers prioritize jobs.

Hersham noted that supply chain visibility is more imperative than ever before. “Knowing where goods currently are, where they will be, and when, will help businesses to plan for disruptions and counteract severe delays,” he said. “It is essential that retailers and consumers prepare for an extended disruption to the supply chain, and plan for what will be a Christmas heavily impacted by these issues.”