This moment has been years in the making, possible only through investing in technology to develop a drop service that provides shippers with the ultimate flexibility. Today, our vast carrier network, shared pool of telematics-enhanced trailers, and machine learning models that predictively route trailers and dynamically price freight come together in an expanded Convoy Go service that can flex in unprecedented ways to meet shipper demand.

I’d like to share a bit more about the big problem with traditional drop, and why we think flexible drop is a game-changer for shippers now and into the future.

Drop-and-hook is the most efficient way to ship truckload freight, and is hugely popular with shippers across nearly every industry. Yet despite the benefits, it’s always been plagued by a fundamental flaw: Traditional drop is inflexible.

Specifically, traditional drop operates well with a fixed set of tractors and trailers running predictable head hauls and backhauls between a fixed set of facilities. For this reason, it’s used almost exclusively for primary contract freight on lanes with consistent volume.

Let’s take a look at why. 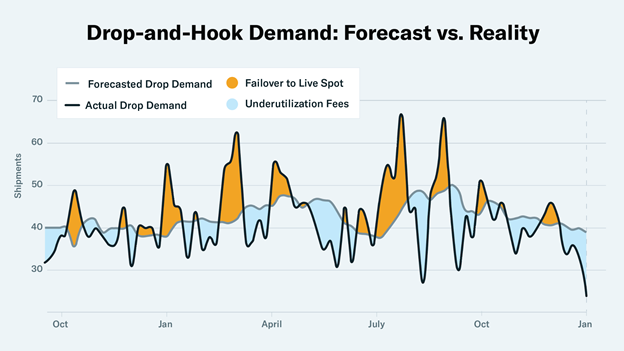 In the chart above, the gray line represents forecasted demand on a drop lane, and the black line represents actual demand. Every time these lines diverge, shippers suffer the consequences of inflexible drop.

When demand surges above expectations (in orange), carriers struggle to flex tractor or trailer capacity, rejecting tenders and forcing shippers to switch to live loads on the spot market. This drives up costs, creates logistical hassles of appointment scheduling and live loading, and increases service quality risk by introducing unfamiliar spot carriers.

Even when demand sinks below expectations (in blue), shippers face hidden costs. As tender volume drops, trucks stop moving. This lower fleet utilization results in punitive fees either charged directly to shippers or indirectly by carriers passing along their higher fixed costs.

This ongoing cycle of spot market spillover and punitive fees has always been part of traditional drop, creating undue burden and risk for transportation teams and constraining the potential of this otherwise highly efficient form of shipping.

Let’s take a look at what drives traditional drop’s cost to shippers.

Traditional drop’s hidden costs can represent an average of 9 percent of a shipper’s annual transportation budget, or US$9.5 million for shippers who move 250,000 drop loads per year. This cost is driven by four factors. 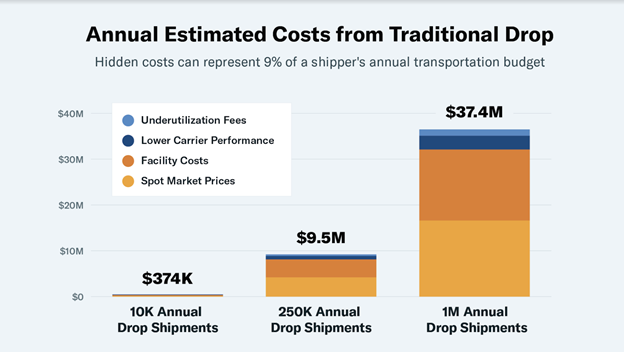 Higher spot market prices: When a shipper’s primary drop load fails and needs to be converted to a live load on the spot market, they end up paying 18 percent more per load on average. With an average drop-to-live failover rate of 15 percent, this can equate to $4.2 million for a shipper moving 250,000 drop loads per year.

Increased facility costs: When a failed drop load is replaced with a live load, it requires more facility space and employees to load and unload it at the dock. To accommodate these converted live loads and meet the expected volume at any given facility, shippers maintain larger warehouses and workforces, which increase operational costs. A shipper who moves 250,000 drop loads per year could pay $3.9 million more in annual facility costs and operating expenses to support converted live loads from failed drop loads.

This lower facility productivity also presents an opportunity cost. Live loading and unloading keeps trucks at the dock for substantially longer than drop loads, reducing the number of shipments a facility is able to move each day by 270 percent. For example, a facility with four docks moving 96 drop loads per day could only move 36 live loads per day.

Lower carrier performance: When a shipper’s primary carrier fails to accommodate a drop load, the shipper turns to different carriers on the spot market. In doing so, they lose the benefit of their primary carrier’s familiarity with the pickup and drop-off facilities. Our data shows that carriers who are unfamiliar with a facility have a 0.7 higher marginal probability of failure, and each failure increases truck costs by 5 percent. With an average drop-to-live failover rate of 15 percent, this can equal $860,000 for a shipper who moves 250,000 drop loads per year.

Higher prices or fees from underutilization: Even if drop demand falls below forecasts, shippers still pay more than anticipated, because the carrier still has to cover their expensive, asset-heavy operations. Some carriers charge underutilization fees to shippers who tender less than their contract stipulates. While other carriers might not charge these fees, they still charge shippers higher rates over time to cover their structural asset costs.

These fees can range from $25 to $75 per day per asset, depending on how long the carrier’s assets remain underutilized. For example, consider a shipper who moves 250,000 drop loads per year and has 28 facilities. If this shipper has nine drop trailers that have been unused for 30 days at each facility, these fees could equate to $485,000.

That’s a lot of wasted heartburn, time, and money, simply because of drop’s inflexibility.

What Is Flexible Drop?

We’re excited to announce a new approach to supplying shippers with the nationwide drop-and-hook capacity they need, on-demand, whether primary, backup, or spot. We call it flexible drop.

Convoy Go is the most flexible drop-and-hook service, offering shippers quality, nationwide capacity across primary, backup, and spot freight. With Convoy Go, shippers can move as much drop as they want, avoiding having to convert to live loads when their primary carrier fails.

In 2017, we introduced Convoy Go, a unique drop-and-hook service that turned the traditional model on its head by opening up drop freight to the million+ US carriers with small fleets, creating a massive addition to capacity while maintaining high efficiency and reliability. Unlike traditional drop’s rigid structure and fixed equipment, Convoy has access to a shared pool of telematics-enhanced trailers that can be hauled anytime by tens of thousands of power-only carriers in Convoy’s network.

Today, we’ve put the final puzzle piece in place, expanding Convoy Go to backup and spot freight. This novel solution turns traditional drop’s costs into savings by avoiding live loads while moving as much nationwide drop as shippers want, all from a single provider.

To make this work, Convoy Go overcomes traditional drop’s constraint of fixed assets, where capacity is limited by trailers, tractors, and drivers. Each represents a potential failure point when a shipper needs to expand beyond established lanes or react to a demand surge. Convoy, however, has tens of thousands of power-only carriers and thousands of telematics-enhanced trailers in our network. This, combined with our predictive routing and pricing models, allows us to supply drop capacity to shippers through backup and spot freight.

This flexible drop capacity creates a new way for shippers to look at how they allocate their overall freight mix. Traditionally, shippers move a fixed portion of their loads as drop, and then supplement whatever fails or is needed in a surge with live loads from brokers. Today, shippers can use Convoy Go to cover all of their nationwide primary drop, and they can supplement their existing drop loads from asset-based carriers with Convoy Go’s backup and spot freight, effectively eliminating the need to ever rely on live shipments. 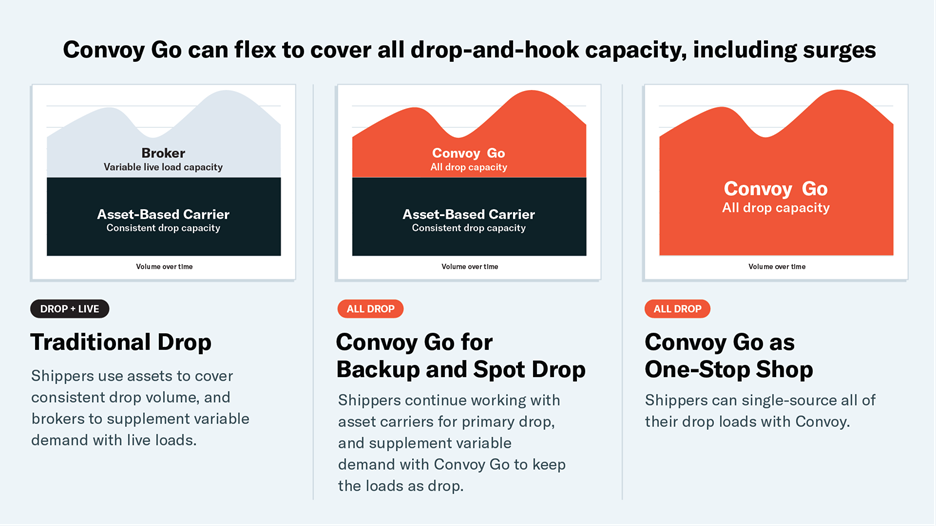 Convoy Go is available to shippers across the nation. Interested in giving it a try? Learn more by visiting convoy.com/drop, or drop us a line at sd@convoy.com. 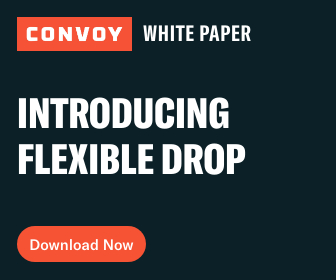 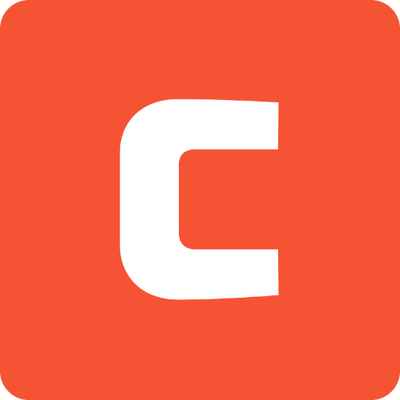