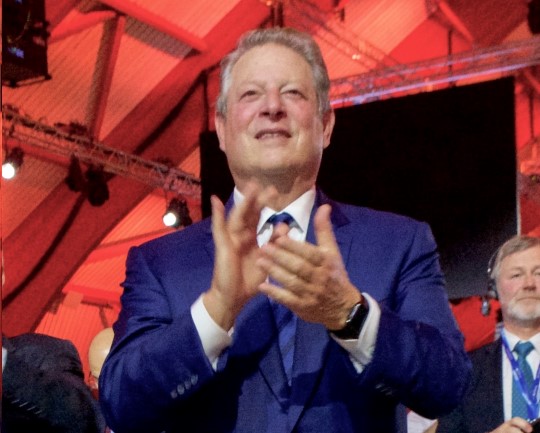 Laws may play a role addressing climate issues, former vice president Al Gore says, but one thing will make the most difference: the advancement of sustainability.

Speaking during a virtual discussion hosted earlier last week by Reuters news agency, he said, “We are seeing a sustainability revolution that has the magnitude of the industrial revolution with the speed of the digital revolution. We are seeing the kind of cost-reduction curves for solar, wind, batteries and electric vehicles — and thousands of hyper-efficiency technologies, the same kind of cost-down curve that we saw with computer chips, mobile phones and flat-screen TVs. The response to R&D leads to lower cost and, simultaneously, much higher quality.”

Contributing to the change are that fossil-fuel plants are being shut down, Gore said, citing examples of General Electric’s shuttering of the Inland Empire Energy Center, a natural-gas plant, 20 years earlier than scheduled, and Florida Power & Light’s move to close two natural-gas plants and replace them with a solar-powered battery system. “We’re seeing this happen all over the world,” he said. “In 2019, if you look at all the new electricity generation installed worldwide, 80 percent of it was solar and wind — and those numbers are still increasing.”

Gore also discussed the immediacy of addressing climate change, which he considers no less of a priority amid the coronavirus (COVID-19) pandemic.

The two crises are related in that they have similarities, he said. “The pandemic reminds us that when the leading scientists who understand the most about the challenges we face are … trying to warn us of an impending disaster, it’s best to pay attention,” he said. “And for quite a few years, the best epidemiologists and virologists have been loudly warning us of a pandemic almost identical to the one we’re struggling to overcome now.”

Climate scientists have been warning — for even longer — “of an even worse catastrophe because of the greenhouse gases disrupting the climate balance and much else besides,” he said. “We need to pay attention to them.”

Another similarity: “Both reveal pre-existing inequities of the structural and institutional racism and the unfairness in the structure and makeup of our economy and society,” Gore noted. In the case of the pandemic, the death rate among Black Americans is 2.2 times higher — (which) understates the differential. The climate crisis … affects the poor and communities of color — the disadvantaged and the persecuted — first and worst.”

There also are differences between the pandemic and climate crisis:

Economics. “We have had a partial shutdown of many economies to try to overcome the pandemic. So many jobs have been lost, at least temporarily,” Gore said. “Where the climate crisis is concerned, we don’t have to shut down the economy; we can open the job-creating engine of the sustainability revolution. The fastest-growing job in the U.S. has been solar installers. For the last five years, those jobs have grown five times faster than average job growth. The second fastest-growing job is wind-turbine technician.”

A recent University of Oxford report found that, he said, “investments in renewable energy and sustainability approaches, dollar for dollar, create as much as three times as jobs as investments in fossil-fuel infrastructure.”

“These crises are braided together and the solution for the climate crisis can help us address the underlying issues that both reveal,” Gore said.