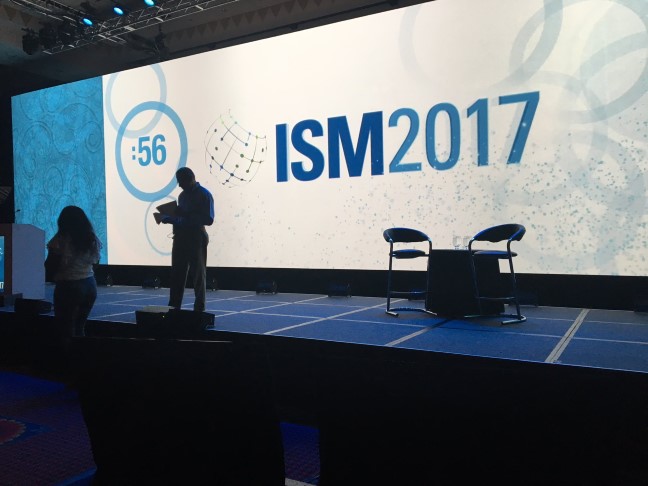 In time, we'll find out if the 2017 edition of ISM®’s Annual International Supply Management Conference is the biggest ever. However, if Monday's Twitter activity is of any indication, ISM2017 at Walt Disney World in Orlando, Florida, is on pace to shatter supply management social-media records.

Inside Supply Management® asked Conference attendees, presenters and exhibitors to make liberal use of the #ISM2017 hashtag, and they delivered. We collected enough tweets to fill three days' worth of entries; however, we'll stick with our favorites and encourage Conference-goers to keep posting. We'll compile and present the best tweets from Tuesday and Wednesday as well.

The Magic Kingdom lifted the lid on ISM2017 in style on Sunday night, during a Welcome Party at Epcot that culminated with fireworks — and featured Disney's multi-colored glowing ice cubes that, I can confirm, are not just for kids.

By all accounts, #ISM2017 is off to a great start. The Welcome Party was clearly the place to be on Sunday night! pic.twitter.com/K1pos5PHC2

Welcome party for #ISM2017 was a blast. Disney, as always, did not disappoint. pic.twitter.com/3hmr6KjtHA

Big crowd for the #ISM2017 kickoff event at #Epcot and who knew this huge hall was hidden behind England? pic.twitter.com/hJFJ72rrQn

The event got down to business on Monday, after Institute for Supply Management® CEO Tom Derry and Conference attendees were welcomed by their host — who, one could say, used a comical attempt at logistics to introduce himself to the world.

The biggest dignitary on Monday was General Colin L. Powell, USA (Ret.). During his keynote address, Powell (1) discussed the procurement and logistics efforts that helped the U.S. win the Persian Gulf War and (2) shared thoughts on such current international issues as trade and geopolitical turbulence.

Inspiring, humorous and thought-provoking speech by General Colin Powell. What an honor to be in the audience. #ISM2017 pic.twitter.com/y5tHaya1ft

Colin Powell: I think the US withdrawal from TPP was a mistake because the only country that really benefits is China #ISM2017 pic.twitter.com/Emgu5YlkQF

To stay up with #technology, you have to spend money. You have to invest. Those who don't will go out of business. - Powell at #ISM2017.

Listening to key insights from @GeneralCPowell at #ISM2017. Almost in tears listening to his background & immigration. #inclusion pic.twitter.com/ja7GCeoWBj

The future of procurement took a bow with the 30 Under 30 Rising Supply Chain Stars, a program sponsored by ISM and ThomasNet.com.

Congratulations to the @THOMASNET and @ISM 30 Under 30 Rising #SupplyChainStars at #ISM2017 pic.twitter.com/GnWAgsXsMY

"What you do is directing impacting the bottom line...tell the story & educate your stakeholders." - Alpar during his session at #ISM2017 pic.twitter.com/vNhxiHdT8f

Insights were shared at a media round table at #ISM2017. pic.twitter.com/zE20EEjElI

"Supply chain is designed to help the bottom line, but who says we can't do more to help our business top line?" @gutweiler_beth #ISM2017

The Exhibit Hall was bustling, and the smiles and sense of humor of good procurement people are always among the best sights at an ISM Annual Conference.

What a great first day at #ISM2017---record-breaking numbers and the largest procurement conference ever! Come see #ADTRAV at booth 318! pic.twitter.com/lLogXpKRrk

Stop by #ISM2017 and have @MarkTolandLive read your mind. pic.twitter.com/T49gXnwzZy

People are queuing up for some green screen photo #fun. Join us at booth #302 @ #ISM2017 pic.twitter.com/TxZuYsz4LK

And finally, here's perhaps the day's best Exhibit Hall experience. We trust this echoes her feelings on the Conference as a whole.

This was way too much fun!! #ISM2017 pic.twitter.com/MmafN8AHDK