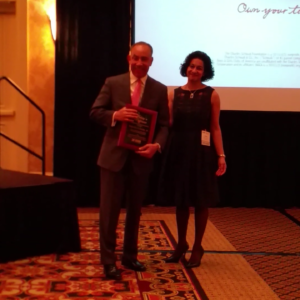 There are few events and conferences where networking and content come together so naturally. Free-flowing conversations, interactive sessions and an overall atmosphere of paying it forward are just a few descriptors for ISM Diversity 2016 in New Orleans. The first of this two-day event in The Big Easy brings together supply management practitioners committed to diversity in procurement.

The morning sessions quickly brought this year’s theme Navigating the Waters into full focus. There was enough wisdom dispensed to help guide even the most seasoned practitioner. And that’s one of the most unique aspects of ISM’s annual Diversity Summit — the coming together of students and professionals at all career levels sharing insights, lessons learned and paths for the future.

With opening remarks from this year’s moderator Cheryl D’Cruz-Young, the event promptly segued to its biggest announcement — the rebranding of its annual student Case Competition to The Shelley Stewart Case Competition. Stewart, one of the most influential and respected executives in corporate America, is DuPont’s vice president of sourcing and logistics and its chief procurement officer. A staunch supporter of ISM’s leading role in supply management, he was instrumental in developing the popular and challenging Case Competition for ISM in 2004.

Stewart remarked that the rebranding of the student competition in his name is a humbling experience. “It’s fortunate for me that helping people comes natural.” An airing of a CNN/Charles Schwab commercial from the “Person Who Changed My Life” series featuring Stewart and his work with the Boys and Girls Club of Trenton/Mercer County, provided an example of his generosity and commitment to others and the power of mentoring.

He took the opportunity to thank Willie Deese, executive vice president and president of Merck’s manufacturing division, for helping him develop and launch the first Case Competition.

Deese took to the podium following the announcement to share his journey navigating a distinguished supply chain career.