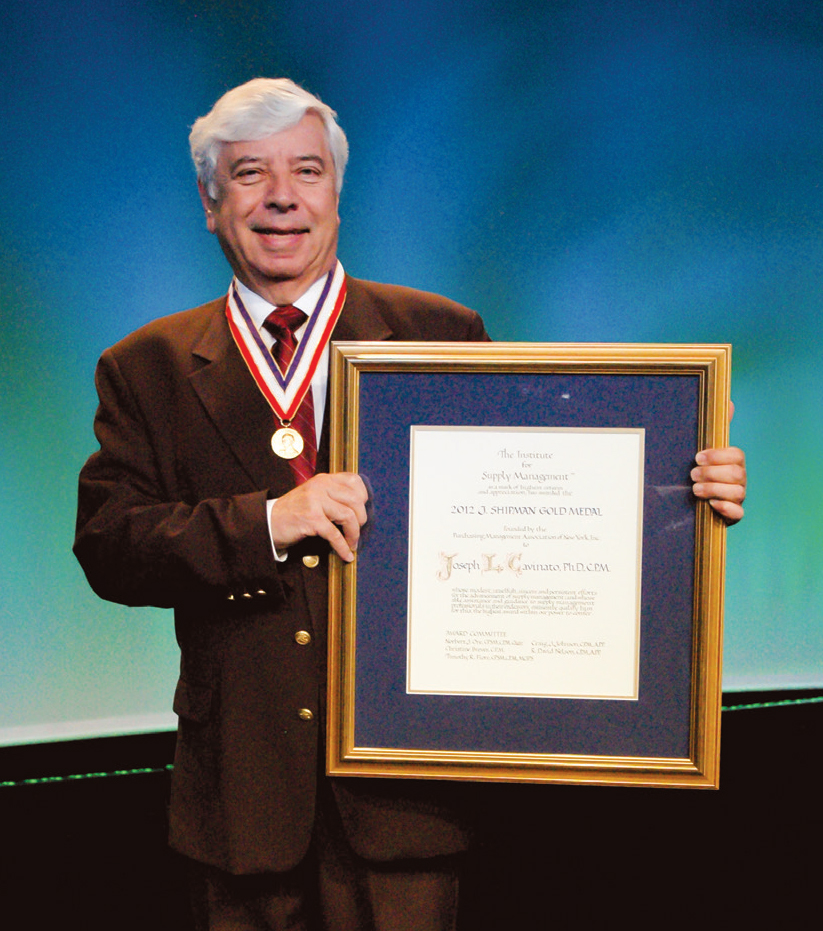 In 2012, Cavinato was awarded the Shipman Award, which is given annually to a person who has performed distinguished service while advancing the supply management profession. Bestowed by ISM, it is the profession’s highest honor. Cavinato was lauded for his persistence, unselfishness and willingness to assist and guide professionals in their endeavors.

An educator at heart, Cavinato had been a professor at Pennsylvania State University — he earned a Ph.D. there in 1975, before returning to teach in 1978 — and a supply management professor, beginning in 1990, and founder/developer of a supply chain leadership program at Thunderbird School of Global Management, now part of Arizona State University.

“I could authentically say that Joe is one of the leading academic minds in our field in that generation, along with Bob (Robert) Monzcka, Hal (Harold) Fearon and Ralph Kauffman, academics who advanced the theoretical framework — and thus the scope of practice — of the profession,” says Thomas W. Derry, ISM CEO. “They laid the foundation for strategic sourcing, which revolutionized supply management.”

Tom Linton, the 2019 Shipman Award winner, says, “Joe was an innovator and supply chain and procurement evangelist. I can only imagine the good will and wisdom he extended to all his students over the years.”

In a 2012 Inside Supply Management® article about Cavinato and the Shipman Award, he stated, “Even when I was in high school, I had a couple of teachers who really had an impact on me, so I knew I always wanted to teach.” However, he decided to gain industry experience after earning bachelor’s and MBA degrees at American University in Washington, D.C., saying, “I felt I would not be legitimate unless I had actually done it.”

His first role was in product development for railway holding company Chessie System, Inc. “I figured out a few years later when I got into pure purchasing that what I was doing at Chessie Railroad were the very first steps that had ever been done there on total cost of ownership,” he said in the 2012 article. He experienced firsthand the evolution of purchasing to supply management, the article noted.

Cavinato’s contributions to ISM and the profession were many, says Nora Neibergall, CPSM, CPSD, C.P.M., ISM Senior Vice President and Corporate Secretary. “As an educator, he mentored and supported students, professionals and executives through the critical period when purchasing and supply management progressed from tactical and transactional to strategic,” she says.

Neibergall continues, “As a volunteer and committee member for the National Association of Purchasing Management (NAPM) and then ISM, Cavinato helped shape the Institute’s education, certification and conference offerings over the course of two decades.” When NAPM became ISM in 2002, Cavinato authored the Institute’s first official definition of supply management, she says.

“With a bright, inquisitive mind, Joe was always interested in what was next on the horizon, pushing practitioners to think beyond their current daily tasks to focus on delivering more value to their organizations. Joe is also remembered as someone who was truly interested in those he met along the way,” Neibergall says.

Anthony Nieves, CPSM, C.P.M., A.P.P., CFPM, Chair of the ISM Services Business Survey Committee and the 2010 Shipman Award winner, remembered the inspiration provided to his organization by Cavinato. “Besides our relationship through ISM, I engaged Joe to speak with my supply management team on multiple occasions,” he says. “Joe was a great man.”

From 2003 to 2012, Cavinato served as the executive director of the former A.T. Kearney Center for Strategic Supply Leadership at ISM; he was one of the center’s founders. In addition to conducting a long-standing research project in which he interviewed executives at leading companies, Cavinato authored numerous supply management books, including as co-author, with Kauffman, of the seminal publication, The Purchasing Handbook: A Guide for the Purchasing and Supply Professional (which in its seventh edition became The Supply Management Handbook).

“I have fond memories of several occasions to observe and participate in Joe’s unique surveys over the years,” says Bradley J. Holcomb, CPSM, CPSD, the 2015 Shipman Award winner. “His broad access to corporate executives allowed him to be the first to discern important developing trends in our supply chain world. Joe was a terrific contributor and a joy to be around.”

Ron Schnur, CPSM, a former member of the ISM Board of Directors, echoes those sentiments. He knew Cavinato for about 40 years, beginning when Schnur was as an MBA student at Penn State in the late 1980s. “When I went back to school, I had decided to concentrate on what at the time was called business logistics,” says Schnur, a supply management consultant.

He enrolled in Cavinato’s purchasing and transportation management class. “Joe was a fun-loving, keep-it-light warm funny kind of guy,” Schnur recalls. “You were able to warm up to him really easily.”

He continues, “At the time, if you were pursuing a career in logistics or supply chain management, there were only a few industries that were focused on that as profession.” One was the automotive industry. Chrysler’s procurement officer, David Platt, a Penn State graduate, would periodically visit the campus, and Cavinato facilitated a meeting and subsequent lunch between Platt and Schnur.

“Joe went out of his way to broker the introduction with Mr. Platt. He helped to fuel the inspiration or the passion that I had for wanting to go to the car industry,” says Schnur, who upon graduation, went to work for Chrysler. “It was a great learning experience. It set me up for the rest of my career. I’m forever indebted. We all stand on the shoulders of other people.”

Later, at Cavinato’s urging, Schnur joined the advisory board of the A.T. Kearney Center for Strategic Supply Leadership at ISM.

“More than a couple times, after I moved to Colorado, I asked him to speak to my procurement and supply teams and share his insights, learnings and research to help motivate them on what was occurring in the industry and what leading procurement organizations were doing regarding commodity management or risk management,” Schnur says.

“You could be in the company for three minutes and he treated you like he’d known you for 20 years,” he says, adding that Cavinato had a great sense of humor. “He had a way of bringing to life what was going on in the profession — and inspiring you to try different things. He was a giver. He would go out of his way to send something to me or speak to my team. It still inspires me today to give back.”

Cavinato is survived by his wife of 52 years, Mary, along with their two children and three grandchildren.