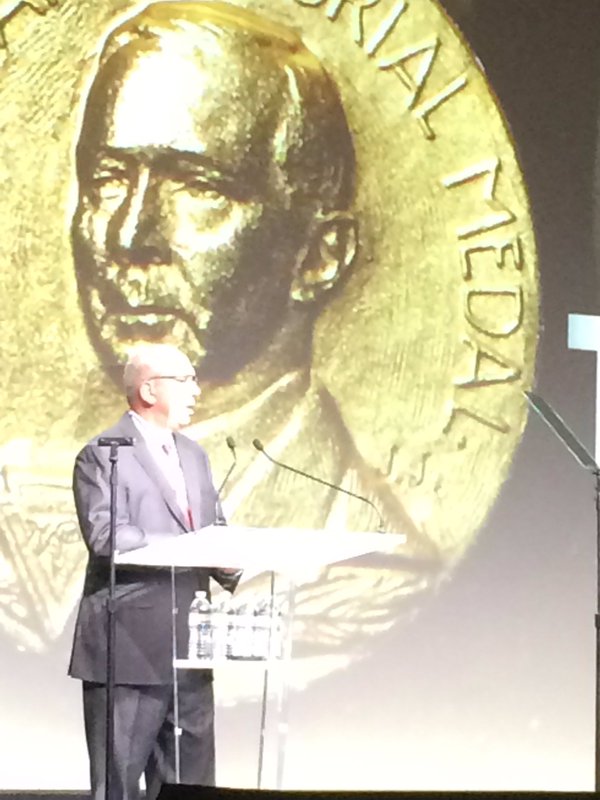 The #ISM2016 hashtag continued getting liberal use during the second full day of ISM's Annual Conference in Indianapolis. Here's a sampling of the experiences that presenters, exhibitors and attendees shared on Twitter.

On Tuesday, the supply management world was Tim Fiore's; everyone else was just conferencing in it. That's the case when the J. Shipman Gold Medal Award is presented, and Fiore, a former senior vice president of supply management and CPO for ThyssenKrupp NA, is this year's recipient of the profession's highest honor.

Congratulations to Tim Fiore, J. Shipman Award recipient, at #ISM2016 & thanks for your support of @CAPSResearch! pic.twitter.com/xeuLXBKZJF

The Shipman Award wasn't the only hardware distributed on Tuesday; the 30 Under 30 Rising Supply Chain Stars and R. Gene Richter Scholarship Award winners were spotlighted.

"A few 30 under 30 #supplychainstars share insights with media on the future of #supplychain @ThomasNet" pic.twitter.com/M7637PDOMy

Congratulations to the 2016 Richter Scholarship Winners by @ism You're starting off in a great profession! https://t.co/ZSiPoncMQc #ism2016

Best-selling author Susan Cain's keynote stressed that — amid the cacophony of a world that typically talks rather than listens — businesses are wise to tap the quiet power and strength many introverts possess.

Susan Cain - Game changing trend of the decade: The Quiet Revolution. How do you harness the talents of introverts? #ISM2016

There were more lessons learned during Conference sessions.

James Haile, JWH & Assoc: Trustworthiness is the most important factor in how people or companies evaluate you #ISM2016

.@JoeVKnight - this is the best, most relevant and understandable #finance class I've had. I'm an MBA. #beautifuldayforfinance #ISM2016 @ism

You could win some cool toys among the buffet of booths at the Exhibit Hall.

Congrats to Peter, winner of our drone giveaway at #ISM2016. Happy flying! pic.twitter.com/dOKxMINlbE

And finally, with the Indianapolis 500 in two weeks, auto-racing metaphors are appropriate.

Aha moment: I just realized I'm on a current pit stop in my own career. #ISM2016 #mindblown